As my faithful 28 readers know, I like to post schedules once in a while as a demo for my clients. Scheduling is one of the main skills we work on in coaching. After we learn to keep track of our tasks with the To Do List, we work on managing those tasks in time by using a daily schedule.

I’ve written much in the past about how and why I post schedules that an objective observer would deem a staggering success. I’ve also written about why I post schedules that have, to be kind, not at all gone according to plan. But, really, the point is that I view both of those outcomes as a success. Why? The very act of planning, of making a schedule, evaluating tasks, prioritizing, vetting the time something will take – even if I’m wrong- giving one’s self structure, following through on a plan, being forced to adjust and be flexible, dealing with curveballs, and making choices as we move through the plan are all tremendously valuable skills. Skills that you will get better at the more you do them.

AND ANY DAY WITH A PLAN IS GOING TO BE BETTER THAN A DAY WITHOUT A PLAN. Of course I’m speaking of productivity here. A totally unplanned, spontaneous day while you’re on vacation in Costa Rica might be amazing. But your average Sunday, when your list is as long as your arm and you stress level level is threatening to over take the levys, needs a plan.

The brief context here is that my wife was actually not working this weekend, for once. Yay! One kid was at my parents for part of the weekend. The other kid was wildly dysregulated and needed lost of support. And, there were some activities mixed in with an English project. I also had a TON to do around the house, in the garden/yard. And we had to get ready for halloween. It was an expanse of 48 hours + with not much structure and no time to dawdle. The perfect time to make a schedule. Saturday was a little more by the book, a series of normal Saturday tasks until I was exhausted.

But I ended the day by making this schedule for Sunday. I annotated it in Red as I went, which I may or may not have done if I hadn’t planned to post if for y’all. I think I’d suggest doing that for beginning schedulers. I don’t think it is important to take detailed notes and study the times. Just making note of a time difference for a task here or there can help you attend deeper and start to internalize how long things really take. I added the blue this morning as sort of a break down of the the overall outcome.

Standard Disclaimer: In an effort to foil my own perfectionist tendencies, I do not edit my posts much… if at all. Please excuse and typ0s, Miss Steaks, grammatical errors, awkward phrasing. I focus on getting my content out. In my humble opinion, an imperfect post posted is infinitely better than a perfect post conceptualized but unfinished. 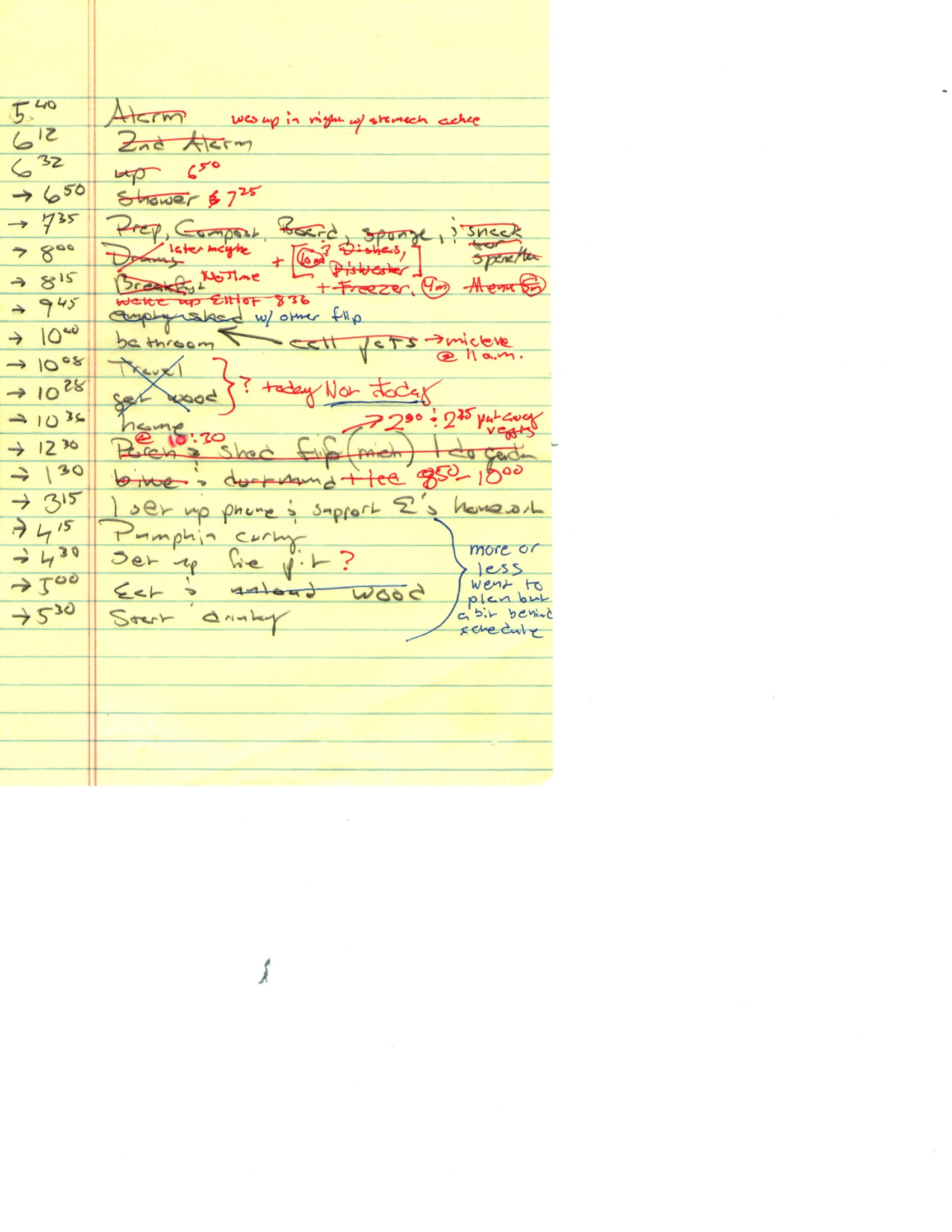