If you have worked with me at all you probably know how I’m a fiend for my To Do List. I do it in a very specific way, and teach it in a very specific way that works great for how we ADHDers are wired. Well, there are rare occasions when the general To Do List isn’t enough. Very large and distinct projects may require their own To Do List. But applying the same skill to that projects lowers anxiety and increases efficiency.

Last week I had two-and-a-half days to flip a rental property for new tenants. I needed to paint the whole bathroom, including the ceiling, put in a new medicine cabinet, install a new ikea closet, touch up or paint all the rest of the rooms, and clean some stuff out among other small things. Plus it was 95 degrees that week and the unit isn’t air conditioned. Quite a big project.
I knew the priority was the bathroom, so I started there and kept moving. Near the end of the first day I had accomplished a ton, but realized there was far more left to do. This kicked up my anxiety significantly. But, over the years I’ve learned to address and attach that anxiety instead of allowing it to rule me and force me into avoidance behavior. So, I took out a big fat pencil and made a list right on the ikea box. Then I estimated the time it would take to execute all of the steps.
Hopefully you are able to see in the pictures that the original list, not counting what I had already done added up to about seven-and-one-half hours of work left to do. So painting is not a thing I do regularly. Even with the data that I had accumulated from the work I had already done, I wasn’t completely accurate. Some things took longer. But I also based the estimates on the most amount of work that would have to be done. It was a worst case scenario. As it turns out, some of the rooms only needed to be touched up. (Shout out to the ladies and gentlemen at Curry Ace hardware in Quincy. https://curryhardware.com/ They are always awesome. But they matched the paint perfectly so I didn’t have to do whole rooms for the most part.) So parts were also shorter.
The bottom line was that after the list was made, I had a plan. That lowered my anxiety considerably. And, I was able to get the rest done in a full work day, just as projected.
The first picture is the original list. The second is where I was at some point the following day. 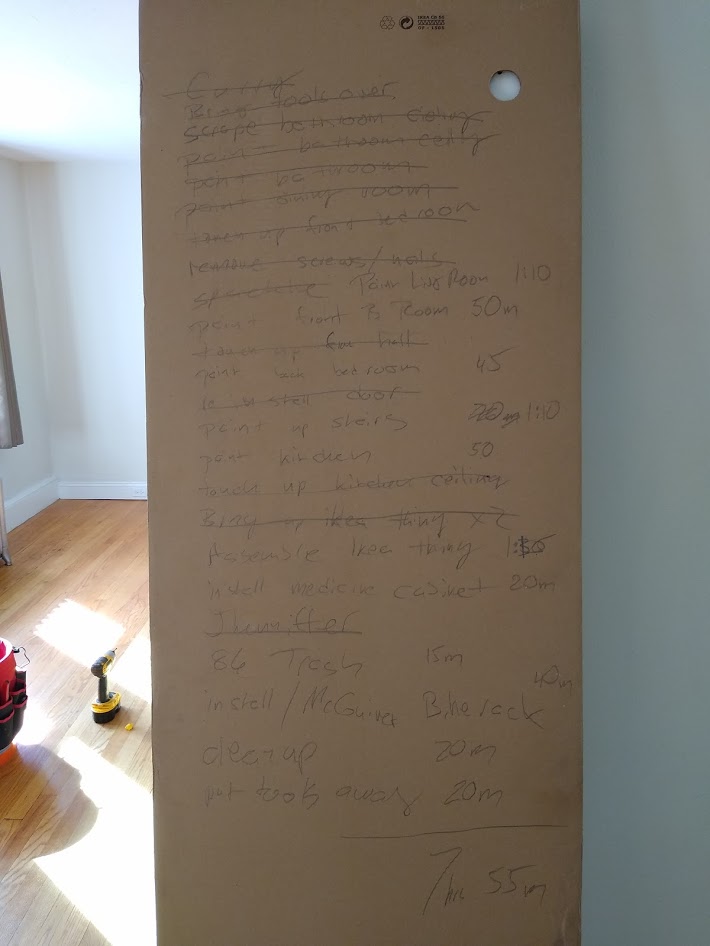